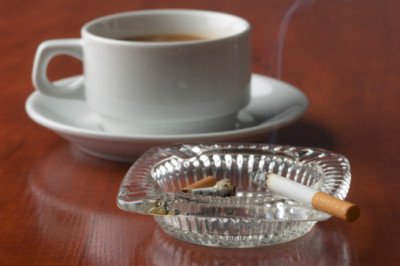 These negative effects are both immediate and long-term, according to a new study in the November 2, 2004 issue of the Journal of the American College of Cardiology.

According to Charalambos Vlachopoulos, M.D. of the Athens Medical School and Hippokration Hospital in Athens, Greece, people who have not yet quit smoking should avoid drinking coffee because the two activities together put enormous strain on the arteries.

The study had two parts: an examination of the immediate effects of smoking and caffeine, and a portion that looked for signs of long-term consequences of smoking and caffeine. In each case, the researchers evaluated the stiffness of the aorta (the largest artery leading from the heart) and blood flow. They’ve studied these two things because each is considered a key player in the development of systolic hypertension, which is a type of high blood pressure that often develops in older people.

The researchers found that when smoking followed caffeine intake, the negative effect was greater than simply smoking and drinking coffee at separate times.

Dr. Vlachopoulos noted that this study involved healthy participants, so the researchers cannot say with certainty if smoking and caffeine have the same effects in people with cardiovascular disease.

So, the advice seems clear – if you smoke, quit immediately. If you don’t, drinking coffee while smoking can be even more dangerous than you’d expect.