Author’s Note: I found this article very informative and am re-posting it here in full. The original article is posted at the Truvia.com website. 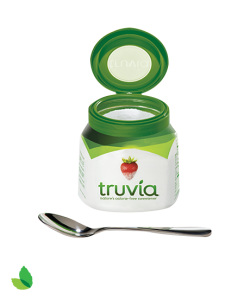 Erythritol is found in a wide variety of foods and beverages. Besides its role in sweeteners such as Truvía® sweetener products, erythritol can function as a flavor enhancer, stabilizer, thickener and texturizer, depending on the food or beverage. You can find erythritol in reduced calorie beverages, frozen dairy desserts, pudding, yogurt, baked goods, chewing gum and candies.

So, What Is Erythritol?

Erythritol is a four-carbon, calorie-free sugar alcohol commonly referred to as a “polyol.” It is used as an ingredient in the U.S., Europe, Japan and many other countries. The term “sugar alcohol” can be confusing because sugar alcohols are neither sugars nor alcohols.  Polyols are actually short-chain carbohydrate molecules that have added hydrogen atoms, which make it hard for them to be absorbed, thereby reducing the amount of calories they provide.

In the body, erythritol is absorbed in the small intestine—making it unique from some other polyols such as maltitol or sorbitol. Unlike erythritol, these other polyols are fermented in the lower gastrointestinal (GI) tract and can be associated with gastrointestinal symptoms such as bloating, gas and cramps. Studies show that erythritol doesn’t raise blood glucose, making it suitable for people with diabetes.  Erythritol also helps prevent oral plaque formation which makes it a tooth friendly sweetener.

Erythritol can be found naturally in small amounts in some fruits such as pears, watermelon and grapes, as well as in some fermented foods like wine and cheese. It’s about two-thirds as sweet as table sugar and is a white crystalline powder that looks similar to sugar.  Manufacturers generally combine erythritol with a more intense, calorie-free sweetener to more closely resemble table sugar. What’s more, when erythritol is used with other high-intensity sweeteners, it can help lessen any after-taste.

The erythritol used in Truvía® sweetener products is produced through a fermentation process. Fermentation is the process by which an organism metabolizes or “digests” one or more food sources to produce a desired product. In the case of erythritol, a natural yeast, Moniliella pollinis, ferments or digests a simple sugar called dextrose and other nutrients and produces erythritol. After fermentation, the erythritol is filtered and dried into crystals.  Fermentation occurs naturally in a variety of different foods given the right conditions, and is crucial in the production of wine, beer, yeast breads and yogurt.

In 2001, erythritol received approval for GRAS (generally recognized as safe) status in the U.S. from the Food and Drug Administration. Several animal and human studies have confirmed that erythritol is safe for use. In clinical trials, doses up to 1 gram erythritol per kilogram body weight per day were reported to be well tolerated. The current body of research supports the fact that erythritol does not cause adverse effects in humans when consumed as intended in foods and beverages.

The WHO/FAO Joint Expert Committee on Food Additives reviewed the safety of erythritol in 1999 and established an Acceptable Daily Intake of “not specified,” the highest safety category possible. Erythritol is approved for use in more than 50 different countries, including the U.S., Canada, Australia and the European Union.

To learn more about how Truvia® sweetener can play a useful role in a healthy balanced diet, click here. »