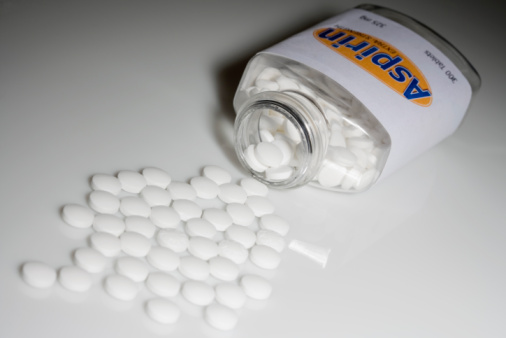 Do you take a daily aspirin to help lower your risk of a heart attack or a stroke? If you answered “yes” to this question, then you are like millions of other people with diabetes. Would you believe that the time you take your aspirin might affect how well it works? This might surprise you, but it is exactly the result found in a recent medical study.

How does aspirin prevent heart attacks and strokes?

A heart attack or stroke is caused when a blood clot forms inside a blood vessel in your heart or brain. This is the same thing that happens when you cut your finger and a scab forms to stop the bleeding.

Why does a blood clot form inside a blood vessel? Diseases like diabetes, hypertension, and high cholesterol damage the insides of blood vessels. Sometimes the injury gets so bad that a blood clot forms. Once there is a clot in the blood vessel, it stops blood from getting to either the heart or the brain. Without their blood supply, the cells cannot get the oxygen they need to live. This can lead to a heart attack or stroke.

Another part of blood clots, called platelets, stick together to form a blood clot when you need them to stop bleeding from a cut on your finger, or if you skin your knee. If platelets are too sticky though, you can get into trouble. That’s where aspirin comes in. Aspirin makes platelets less sticky and this lowers the chance of a blood clot forming inside you blood vessels. This in turn lowers your risk of a stroke or heart attack.

The healthy effects of aspirin on platelets are thought to last for about one week, so it should not matter when you take your aspirin. All the same, researchers wanted to check if taking aspirin at night might make platelets less sticky the next morning.

What do these results mean?

What the scientists hope this means for you is that if your platelets are less sticky in the morning, you are less likely to have a heart attack or stroke in the morning.

However, this study did not prove that having less sticky platelets in the morning really lowers the number of morning heart attacks and strokes. Even though it would make sense that this is true, researchers will have to do another study to prove it.

Although there are no confirmed benefits of aspirin helping reduce heart attack and stroke risk, there do not seem to be any risks of taking aspirin at night. Therefore, take one aspirin before bedtime to increase your chance of a heart healthy morning!

For more about the importance of keeping your heart healthy, have a look at Take Charge of Your Heart Health.