You probably know that diabetes is a serious disease that affects millions of Americans today. If not treated properly, it can damage your heart, kidneys, nerves, and eyes.In many cases, medicines (including insulin) are needed to treat type 2 diabetes. Sometimes, if caught early enough,diabetes can be treated with exercise and healthy eating.

In addition to the vitamins, minerals, and other nutrients that you get from eating a balanced diet, health experts have discovered that some foods have extra diabetes-fighting powers. For example, a recent study has found that turmeric, a fragrant yellow spice, could help fight heart disease in people with diabetes.

What is turmeric, and how does it fight heart disease?
Turmeric is a root that comes from the same family of plants as ginger. It is ground into a yellow powder that is commonly used in Asian and Indian cooking.

What gives turmeric its disease-fighting powers? It contains a chemical called “curcumin” that experts think is the source of its health-giving effects. Scientists think that, in the body, curcumin can help fight harmful stress and inflammation and improve the levels of fats (like cholesterol and triglycerides) in your blood. Taken together, these effects might make your blood vessels healthier and lower your risk of heart disease.

This study included 250 people with type 2 diabetes. Half of them took capsules containing turmeric every day, and the other half did not. The study lasted 6 months.

At the start of the study, everyone had a test that measured the stiffness of their arteries. Part of the problem in heart disease is that blood vessels become stiff due to the buildup of fat and calcium-containing plaques.You may have heard this called “hardening of the arteries.”

Each person also had blood tests that checked fat levels, how well their insulin worked, and levels of chemicals that are signs of inflammation.

When the study was over, everyone had all of these tests done again. What the researchers wanted to know was whether there was a difference in the test results at the end of the study in the group that took the turmeric. 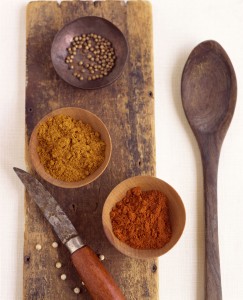 Even better, no one in the turmeric group had any side effects from taking it.

It’s important to know that the amount of turmeric people took in the study was more than you would get from using turmeric in cooking. They were taking it as a nutritional supplement, which is why it came in pills. Turmeric pills can be found at health food stores.

Even though no one in the study had problems from taking turmeric, if you want to start taking it you should talk to you healthcare provider before you start.