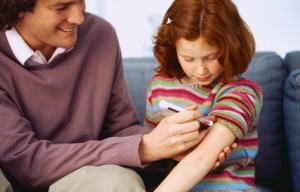 You probably already know that insulin plays a big role in diabetes. You need this important hormone to keep your blood glucose levels under control. If you don’t make enough (as in type 1 diabetes), or if the insulin your body makes doesn’t work as well as it should (as in type 2 diabetes), you will need to take insulin shots to manage your blood glucose levels and avoid complications. This is why your healthcare provider has probably measured your insulin levels a few different times. But did you know that your insulin levels between ages 3 and 6 are linked to your diabetes risk later in life?

A recent study from the Centre for Hormone Research at Murdoch Children’s Research Institute in Australia looked at almost 2,500 children between the ages of 3 and 18. The researchers followed them regularly for 21 to 31 years, to see if any of the tests they did at the beginning of the study were linked to the kids getting diabetes later in life. They found that fasting insulin levels (which are measured with a blood test) between the ages of 3 and 6 were tied to the children’s risk of having diabetes as an adult. The researchers also found that BMI between the ages of 9 and 18 were linked to adult diabetes, but fasting insulin levels were not.

So what does this mean for you? It means that it may be valuable to test your child’s fasting insulin level if he or she is between 3 and 6 years old. And, no matter what age your child is, it is important to help him or her maintain a healthy weight through a balanced meal plan, low stress levels, and plenty of exercise.