You may have heard that two of the most common health problems facing adults today are diabetes and obesity. What you may not know is that many people who suffer from these conditions also tend to have other medical problems, such as high blood pressure and high cholesterol.

Health experts think that one factor that has lead to higher obesity rates is the fact that people today drink more sugar-sweetened beverages (SSBs) than ever before. SSBs include soda, energy drinks, flavored ice tea, and many boxed juices.

All the added sugars in these drinks can cause you to gain weight, because more sugar means more calories. In addition, according to the results of a new study, drinking SSBs may also lead to high blood pressure. 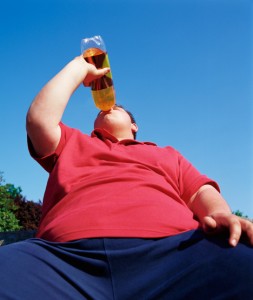 This new study combined the results of 12 previous studies and included more than 400,000 people. The study included people aged 12 and older, and they were followed for up to 38 years. The people in the study answered questions about how often they drank SSBs and how much they drank.

The researchers also kept track of people’s blood levels and how many of them had high blood pressure (hyptertension), as judged by their healthcare providers.

They wanted to know if there was a link between drinking SSBs and getting high blood pressure.

The results of the study showed that:

The first important thing to understand is that the results of this study don’t prove that drinking soda or other SSBs causes high blood pressure. A different type of study would be needed to show this.

So, even though not everyone who drinks SSBs will get high blood pressure, there are many reasons why it’s a good idea to limit the amount you drink to no more than 12-ounces (one can of soda) once or twice a week.