Today’s frozen dinners are nothing like frozen dinners of years gone by.  Take a walk down the frozen food aisle in your grocery store and you’ll be amazed at the variety of frozen meals that you can choose from. There’s something for pretty much everyone – vegetarian, gluten-free, and even organic.  Frozen meals are a billion-dollar industry and at least 70% of Americans eat them.  And why not? With so many different kinds and flavors available, it’s possible to eat a frozen meal every day or night of the week and never get bored. 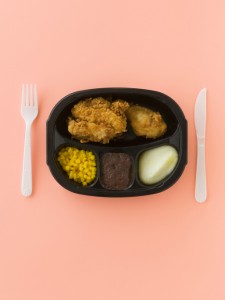 While many people shy away from frozen dinners, preferring to prepare meals in their own kitchens, there are reasons to at least consider fitting a frozen meal into your eating plan.

People often think of frozen meals as being some of the worst foods to eat, in terms of nutrition. And they’d be partly right.  Fried chicken, potatoes drenched in gravy, and boneless pork ribs are hardly the poster children for good health.  While frozen meals can be part of a healthy eating plan, beware of these pitfalls:

So, how DO you know if a frozen meal is nutrition-friendly or not?  Use these guidelines to help you make the right choice.  Always read the Nutrition Facts panel on the package.