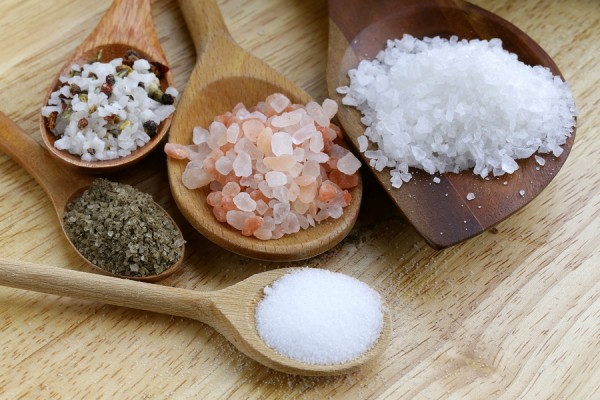 Our recommended daily intake of salt is one teaspoon, or less than 2300 milligrams (mg) of sodium. This comes from the 2015 Dietary Guidelines for Americans.  But most people eat much more than 2300 mg. In fact, the average intake is more than 3400 mg per day. Too much sodium raises the risk of high blood pressure, heart disease and stroke.

Where we get sodium

Salt is, of course, a source of sodium, and using less in cooking and on foods is important if you have high blood pressure. Most people can use a small amount of salt, however. But what type of salt is best?

There are many types of salt to choose from, ranging from the very basic to fancy, gourmet salts. Which is best, and are any healthier than others?

What about salt substitutes?

Salt substitutes, which contain potassium instead of sodium, can be a good choice for some people. However, if you have kidney problems, you should check with your doctor before using a salt substitute as too much potassium can be harmful.

The bottom line with salt is that there is really no difference, nutrition-wise, between the different types available.  You’ll get slightly less sodium, per serving, with larger-crystal salts such as kosher and sea salts. However, all salt, except for light salt, contains 2300 mg per teaspoon.  Use a small amount and boost flavor with other sodium-free seasonings, like herbs, spices and pepper.