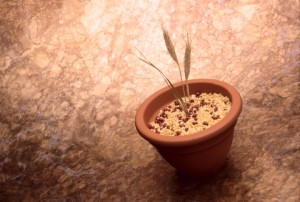 Have you come across “sprouted grain cereal” or “sprouted grain bread” in your grocery store and wondered what it is? Companies that make sprouted grain products claim that they can help improve digestion and provide more nutrients that other grain-based foods. But do they?

What are sprouted grains?

To understand just what these sprouted-grain foods are, it helps to understand a little bit about grains in general. Grains, such as oats, barley and rice, are actually the seeds of plants. The grain has three edible parts to it – the germ, endosperm and bran. The germ is the plant embryo that feeds on the starchy endosperm. The bran layer provides nutrients and some protection (along with the outer husk that we don’t eat).

There are special growth-inhibitors in the grain that keep it from sprouting and turning into a plant until conditions are just right. When the germ, or embryo, is ready to start sprouting, enzymes kick in and turn the starch of the endosperm into more easily “digested” molecules that help the plant grow. The outer bran of the seed splits open and you can see a small shoot poking out. This is what a sprouted grain looks like!

What are the health benefits of sprouted grains?

Just as the young and growing plant finds the starchy part of the endosperm easier to digest (thanks to those enzymes), some people find sprouted grains a little easier on the stomach than regular or ungerminated grains, causing less bloating and stomach upset.

Sprouted grains may also provide more nutrients than regular grains. Remember that the endosperm is the starchy part of the seed that nourishes the plant embryo. The sprouting process reduces some of the starch in the grain, making it lower in carbohydrate which, in turn, can make it easier to control your blood sugars. And because there’s less carbohydrate in the grain, the amount of protein is a little bit higher. Also, sprouted grains tend to have a higher availability of vitamin C, folate, zinc and iron (meaning, these nutrients are more easily absorbed than in regular grains). Sprouted grains are lower in gluten (but not necessarily gluten-free) and contain more soluble fiber, a type of fiber that can help lower cholesterol. Finally, don’t forget to read the label for total carbohydrate grams.

Is there any research that supports the benefits of sprouted grains?

A handful of studies show sprouted grains to have potential health benefits. For example, sprouted brown rice may help lower blood sugar levels in people with diabetes and boost HDL (good) cholesterol levels. Sprouted buckwheat has been shown to lower blood pressure in rats and reduced fatty liver in mice. However, more and larger studies need to be done to truly understand the role that sprouted grains play in health and disease prevention.

Are there any downsides to eating sprouted grains?

While sprouted grains may contain less gluten than regular grains, they’re not necessarily gluten-free. For example, sprouted wheat grass or barley will still contain gluten. If you have celiac disease or have a gluten sensitivity, you should avoid eating these grains.

Most sprouted grains, such as rice, barley and wheat, are ground up and cooked into bread, pasta or cereal. Be careful about eating raw sprouted grains or beans (like mung beans or chickpeas, for example), as the sprouting process can encourage the growth of bacteria. Cooking will destroy the bacteria, however.

Where can you buy sprouted grain products?

Your local supermarket or health food store likely carries sprouted grain foods. Brand names to look for include Food for Life, Essential Eating Sprouted Foods, Shiloh Farms and Alvarado Street Bakery. You can purchase foods from some of these companies directly from their websites if you’re unable to find them locally.