Whole grains are the fiber rich, natural forms of the carbohydrates that you are told to consume daily as part of a heart healthy lifestyle.  And not only are whole grains good for your heart, but they are also good for extending your life.  A study in the Journal of the American Medical Association Internal Medicine found that over a period of 26 years, study participants who consumed the most whole grains daily were one-third less likely to die than those who consumed the lowest amount of whole grains. For every one-ounce serving of whole grains that they consumed daily, their risk of death by heart disease was lowered by nearly one-tenth.  Therefore, it is recommended that you consume at least 28 grams of whole grain per day (through foods such as oats, popcorn, and whole grain rice) to best increase the quality and quantity of your life.
Read the full article.

No such thing as healthy obesity 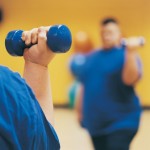 Over the years there have been studies that reported that as long as you do not have any health risk factors, such as high blood pressure or diabetes, then it can be healthy to be obese.  Some studies claimed that the extra weight of a healthy obese person could help support them if they got acutely ill. However, a recent study in the Journal of the American College of Cardiology reports that even the “healthy obese” are more prone to health decline in the long term compared to those who are not obese.  After 10 years of the study, over one-third of those who were considered “healthy obese” at the start of the study became unhealthy obese, which means they developed high blood pressure, diabetes, or another obesity-related condition.  After 20 years of the study, over one-half of the initial “healthy obese” had become unhealthy obese.  Those who were not obese declined at a slower rate, with fewer than one quarter becoming unhealthy non-obese over 20 years, and only one-tenth becoming healthy or unhealthy obese during this time.  So, no matter what the state of your health, make it a goal to keep your weight at a non-obese level so you can stay as healthy as possible for many years to come.
Read the full article.

As part of a healthy lifestyle, you might be told to watch less TV and be more active.  This healthy lifestyle practice is important because it gets you moving more and burning more calories each day.  In addition, a recent study by the The International Journal of Communication and Health found that study participants who watched more hours of television each day were more prone to eating unhealthy snacks during TV time and overall had a poorer knowledge of proper nutrition.  The study found that those who watched more TV had greater exposure to commercials, news, and other programs that told them to buy and eat unhealthy foods, while then telling them that they should eat a healthier diet.  These conflicting messages can make some people who watch a lot of TV feel like nutrition and healthy eating are too difficult to understand and accomplish.  Therefore, people who watch more TV are more prone to become obese. So, if you do watch a lot of TV, try to keep fewer unhealthy snacks around the house, and also try to decrease TV time in the long term so you can lower your risk of obesity and related disease.
Read the full article.

Leading a healthy lifestyle can be a difficult journey, with many ups and downs along the way.  Life stresses, such as job, family, financial problems or relationships, can cause us to engage in negative thinking and other unhealthy habits, such as overeating, not getting enough sleep, and being less active.  A recent study by the American Heart Association showed that people between the ages of 45 and 84 years who were more positive in their outlook had more healthy measures of heart health, such as blood pressure and body mass index. They were also more likely to eat healthy, stay active, and not use tobacco. Those surveyed who were the most positive in their thinking were over two-thirds more likely to have health measures in the ideal ranges. People with the highest levels of positive thinking were twice as likely to have ideal heart health measures and had healthier levels of fasting blood glucose and cholesterol as compared to their less positive counterparts. Therefore, it is suggested that programs to help improve mental well-being may be helpful in improving heart health and lowering the incidence of future heart disease.
Read the full article.