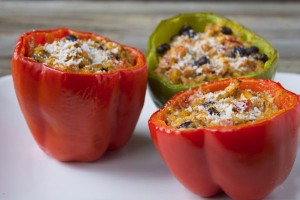 Stuffed peppers are the best. They utilize end of the summer bell peppers and you can pretty much make them your own based on what flavors you like. Feeling spicy? Go for Mexican themed. Feeling Mediterranean? Try a Greek-inspired pepper with feta, olives, cucumbers, rice, and tzatziki. Feeling saucy? Go Italian style with tomato sauce, mozzarella, and basil. The options are endless.

I was feeling a little fiery and decided to go for Mexican style. Many people will stuff peppers with ground turkey or beef but this pescetarian decided to try fish! And it turned out awesome. They were super flavorful and bright in color, making it a dish any family would run back to the dinner table for.
Author: Kara Lydon RDN via nutritionstarringyou.com
Ingredients
Instructions
3.4.3177